"WHEN THE FOREST LOOKS BACK"

A SOLO MISSION TO THE COAST TURNED TO PAINT

Over the last 4 years I have discovered and built my life around the rugged coastlines, lush forests and waves that reach the shores of the pacific coast here on Vancouver Island. Today, I want to share with any one who stumbles along this page a little bit about my creative process in my latest piece, "When the Forest Looks Back". 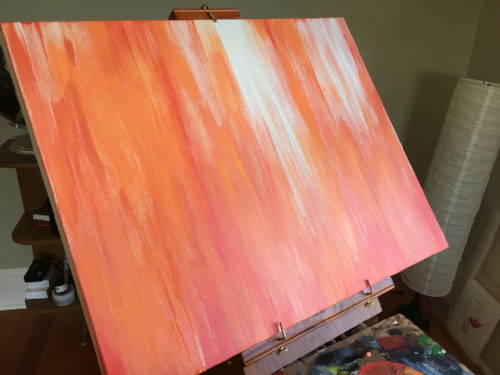 As most of my creative work does, this piece began before I put my first stroke on canvas, before I stepped into the temperate rainforest in search of surf, it began in the process of conceptualizing the possibilities of what I could do next. I a few weeks previous, I pulled out my acrylics for the first time in a while. Over the last couple years, I have been quite transient, and for that reason, my medium of choice was watercolour and Ink, which allowed me to bring everything I needed with me where ever I went.

After opening up my acrylics and starting that first smaller piece (which you will see in a shot below) I realized how much I missed painting in acrylics, and how much freedom I had with a larger brush and loser strokes, and then one day I took a trip to good old Opus Art Supplies in Victoria, and a sale on larger canvas's gave me the great idea that I should try a bigger piece, and here we are. 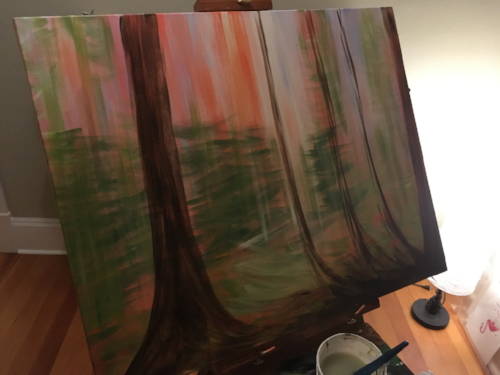 I had no plans for this seemingly giant, intimidating blank canvas until one day at the beginning of September when I needed a pick-me-up and decided to take myself on a solo excursion to find waves and surf. This day, the forecast was a classic, "there could be waves, but I might end up driving 2 hrs, and hiking for another 2 and find nothing" type of day.

After finding my parking spot, I loaded up my backpack with my westsuit, lunch, water, food and some art stuff incase I did end up getting skunked. I half ran down the dirt path through the woods in anticipation for what I would find when I reached the coast, with nothing but that end goal in mind. As I was rushing through the woods, I had to stop to catch my breath and readjust, and as I paused my surroundings were completely silent, with only giant trees and rays of sun reaching the forest floor in all directions around me. 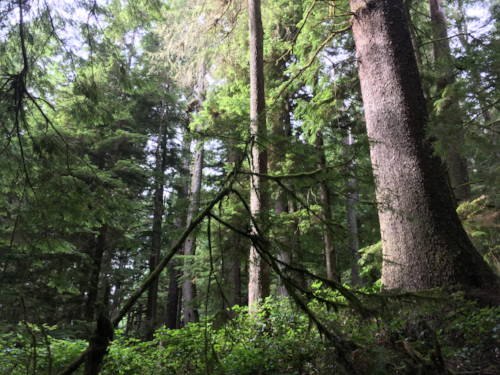 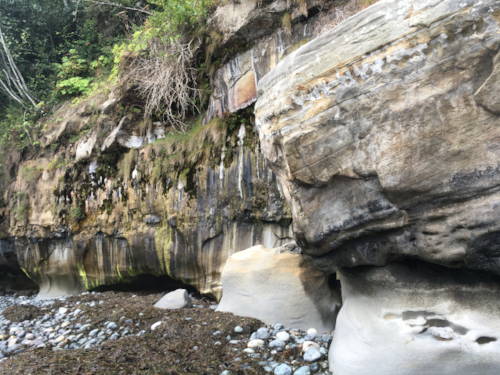 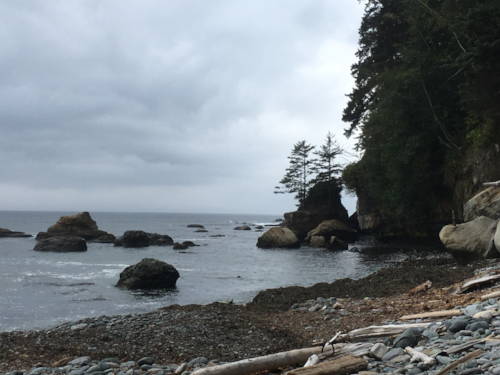 After that pause, I forgot about my end goal of getting to the coast, and began to notice the tiniest details of the place I was at. The lack of auditory stimulation was at first disconmforting, with the thought of a potential encounter with a bear or cougar, so I picked up a stick and tapped along trees and stumps down the path to make myself known in their territory. Once I moved past the fear of being alone, my creative mind began to wake and I fell into a state of curiosity about the colours, textures, lighting and emotions of that special place.

I eventually made it down to the coast, after 1.5 hrs of getting lost on the trail, to fin no waves when I arrived. As you might have guessed, a walk in the woods to find surf, just turned out to be a walk in the woods, but a gentle reminder from the coastal forest to my frantic mind that sometimes you just need to slow down, and so this piece is a reminder to myself to slow down, take in the details and appreciate whatever life throws your way.

Progress shots of the layers 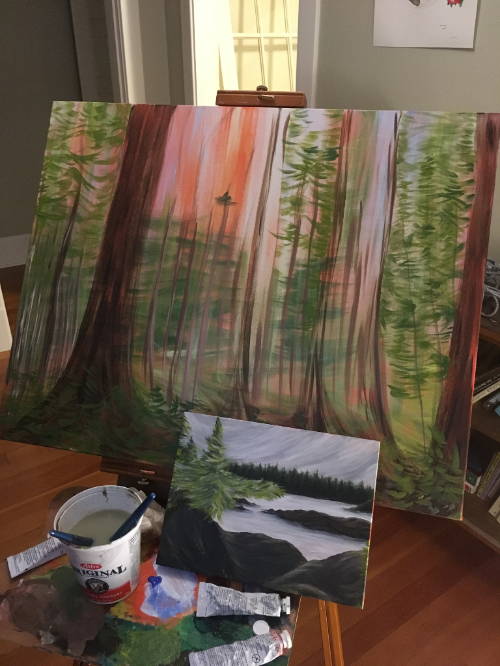 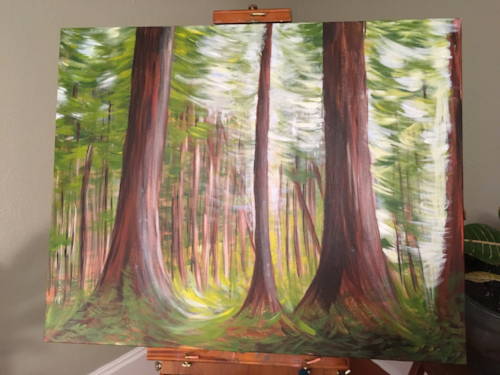 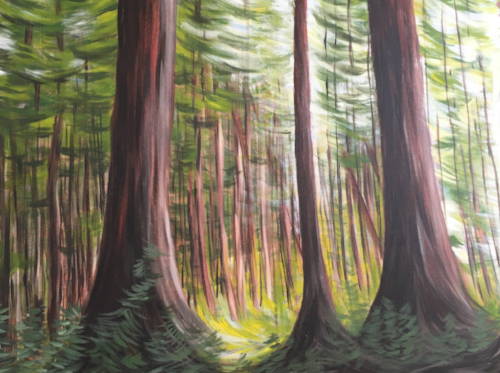 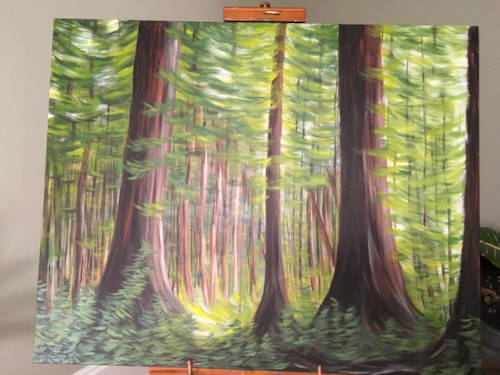 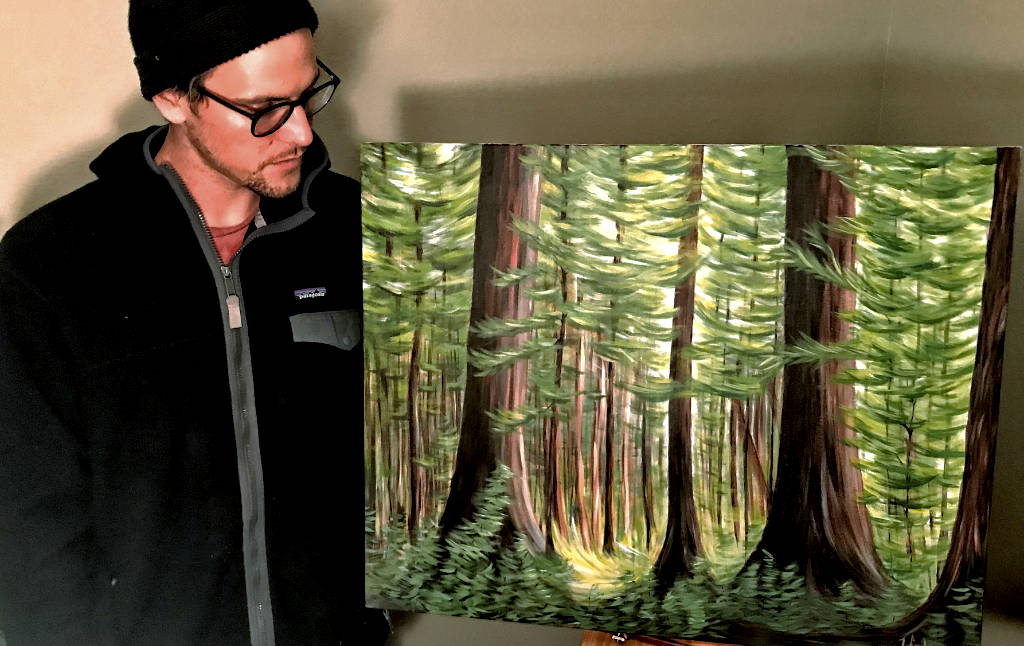 Thanks to anyone who took the time to read, and please feel free to shoot me a message if you have any questions about the piece, or any of my other work!

Recent Posts from the Field